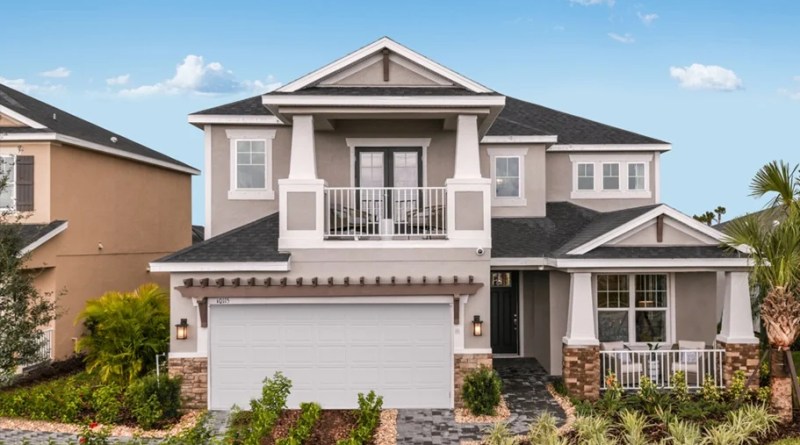 Welcome to our Builder Highlights Series by Moving to Orlando REALTOR®, Ruben Colon

Full disclosure, this builder used to be my number one, but I would now rank it my third favorite. However, ranking top three compared to all the builders out there is not necessarily a bad thing. Also, they have made a few changes towards one big flaw I pointed out in my video and later in this article. However, let’s focus first on what makes Taylor Morrison such a great builder!

Firstly, just like Pulte (and really any builder on this list), they offer some excellent floor plans. From the Anastasia (personally one of my favorites) to the Antiqua & even the enormous Bimini floor plan, you have so many different options of excellent floor plans to choose from. You really can’t go wrong with the quality of the builder when looking at Taylor Morrison. They also seem to make sure they are building in just about every single area in the Central Florida region. Rather it be Winter Garden, Clermont, Kissimmee, Davenport, or even Minneola. You can find a community where they are building in just about every city in Central Florida.

However, one of the best things about Taylor Morrison is the guest service they provide for my clients. I always hear great things from my clients post-closing regarding any issues they’ve come across. Not to mention leading up to the closing table, the agents here really take the time out to communicate with me constantly and answer any of my client’s questions.

Finally, their communities really do show a variety of different styles. For example, lets look at two neighboring communities by Taylor Morrison: Crestview in Clermont & Canyons At Highland Ranch in Minneola. While both are gated, they do stand out from each other despite being only a few miles apart. For example, Crestview is a smaller community and features homes closer together. By doing so, the lots are obviously a little smaller, but much more affordable because of this. Lots here range anywhere between 15,000 to 30,000 depending on the size and location of the lot.

Canyons At Highland Ranch offers larger lots and homes are more spread out from each other compared to Crestview. However, because of that the lot premiums are much higher. Canyons lot premiums varies depending on lot size and location, however the lowest I’ve seen started at 25,000. Although, most of them usually average between $50,000 to $90,000. Creating a variety of different styles in each community offers a great opportunity to allow you to go with what’s more affordable or what gives you more space.

So, what are the flaws that Taylor Morrison shows. Honestly, they don’t have much against them really in my opinion hence why they are in my top 3. However, one of the biggest things that stands out has to do with something I don’t like when builders do. I’ll admit, I probably lowered them from first to third specifically because of this one flaw bothered me so much. This has to do with some of their more popular communities.

Let’s look at Bellalago and Canyons At Highland Ranch. Both communities are gorgeous and are some of the best Taylor Morrison has to offer. However, because of the demand for lots in these communities they did end up allowing clients to bid on lots that were released rather than just go down a wait list. Honestly, I wasn’t happy with this decision.

One of the biggest reasons why some buyers decide to go new build rather than resale is the fact that they really don’t want to end up in a bidding war. However, Taylor Morrison created a bidding war in this communities I listed above because of the demand for the community. Now, I understand why they did what they did, and they are not the only community that did this (D.R Horton did this too). I also want to point out that recently (not long before posting this article) I believe they discontinued those bidding wars for those lots. I still had to point it out and for now, I decided to put them number three on my list for that reason.

Join in the conversation

Florida has a a lot of great builders and new developments to chose from. To take part in the conversations on Moving to Orlando, residing in Florida, and living near Disney, join our Moving to Orlando Facebook group. In addition, stay tuned to MovingtoOrlando.com to stay up to date on what’s going on in Central Florida.

If you are interested in getting started on your Florida home purchase, our expert Moving to Orlando REALTORS are here to help you navigate the market. Take a moment to fill out our contact form or contact me directly at Ruben@MovingtoOrlando.com.

Hey! I’m Ruben, one of the Realtors with the Moving To Orlando Team! I currently live in Clermont and have lived here my entire life. I’m a big fan of the area that I grew up and it’s exactly why I haven’t left the area! I’ve spent my entire life here so hopefully I can show you around, help you get to know the different areas, and show you why it’s show great living here in Central Florida. I look forward to meeting each and every one if you!!