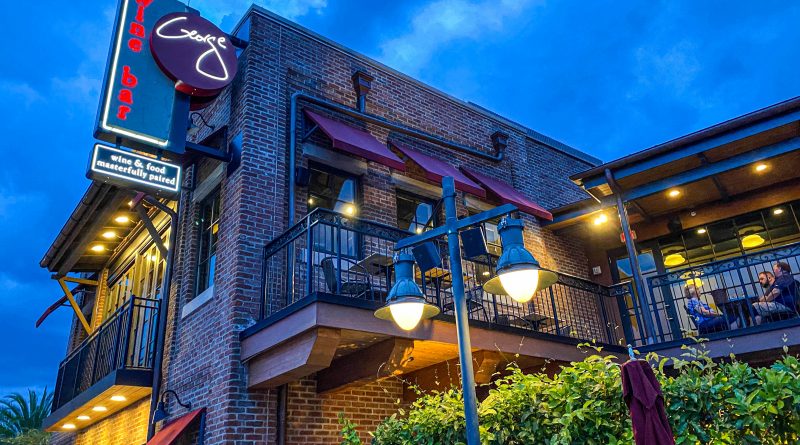 With the transformation of Downtown Disney into Disney Springs, more and more locals are finding their way onto Disney property. The main reason – the incredible dining options that are available.

When Wine Bar George first opened at Disney Springs in 2018, I was underwhelmed. The menu was all ‘small plates’ and what was being served simply wasn’t good enough to warrant the outrageous prices being charged. As a result, it fell off my radar completely.

However, recently some friends were in town and invited me to dinner there. Ever the optimist, I decided to see if and how the restaurant had changed over the last few years. I’m glad I did.

I’m not sure if the executive chef changed in that time, or if he/she got screamed at by Gordon Ramsey, but something here has definitely changed for the better. While small plates are still on the menu, we now have a selection of entrees as well.

For our starters we ordered Shishito Peppers (with lime and chipotle seasoning) for $9, and Warm Spiced Olives (with lemon and chili peppers) for $8.

I had the olives, and well – they lived up to their name, they were warm, spiced olives. There isn’t much more to say than that. There was also some roasted garlic mixed in, which gave a nice sweetness

My friends split the Shishito peppers. They felt that they didn’t need the extra flavoring added with the chipotle seasoning, that it detracted from the flavor of the peppers.

We also ordered a plate of the Iberico Pork Pluma and this is where I started to realize that Wine Bar George had changed. Yes, at $28 this dish should sing you an aria during your meal – and in a culinary sense, it did. The pork was melt-in-your-mouth tender and perfectly seasoned. It was also served at room-temperature, which would normally be a deal breaker for me. I prefer my food hot, but to be perfectly honest – whether it was by accident or by design, it did nothing to detract from the dish.

For the main course, I ordered Santa Carota Short Ribs. This was served with a selection of root vegetables in a vegetable broth that is better compared to ambrosia, but I’ll get to that in a second. The short ribs were arguably the best I’ve had on property (and among the best I’ve had anywhere). Perfectly cooked and seasoned, fork-tender, and topped with a brown gravy that complimented the flavor of the meat, it didn’t mask it. Now back to that broth. There was something about this broth that made me want to grab a straw and suck it up off the plate. It was hearty, without being heavy. It was sweet, without being obnoxious and it provided a wonderful balance to the rest of the flavors on the plate. This dish isn’t good cooking, it was art.

For their entree, my friends ordered the Skirt Steak for two. They gave it high marks, commenting that the seasoning was done perfectly, the steak was cooked perfectly and was very flavorful. They described the dish as simple, but perfectly executed. There was nothing ‘unnecessary’ on this dish.

Given the amount of food we had just consumed, we all decided to pass on dessert, so I can’t speak to that. The total of three adults was $174.13 (no discount was available at dinner). Also, no one had any alcoholic beverages, so keep in mind that dinner was almost $60 per person WITHOUT alcohol. Given that the restaurant is named “Wine Bar George”, you should expect your visit to cost a bit more (assuming you like wine).

Overall, this experience was enough to put this back on my radar. It’s an excellent experience, and also one that offers outdoor seating (very important right now, and the only way I’ll eat in a restaurant). I would highly encourage you to check this place out. It stands out in the sea of mediocrity (I’m looking at you Paddlefish) at Disney Springs.