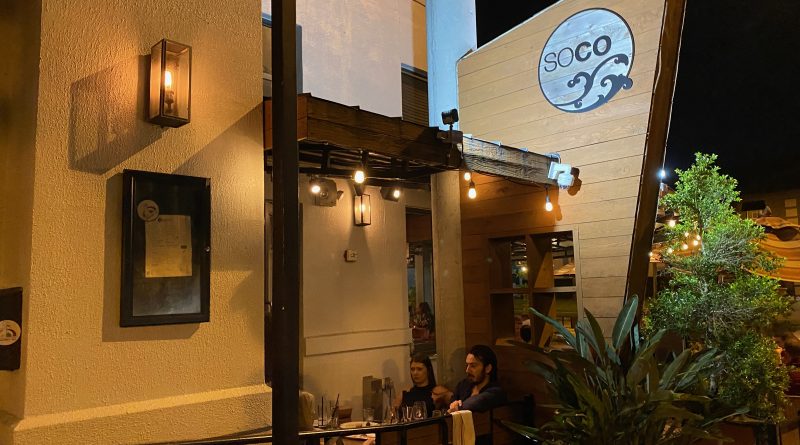 Recently, I had the chance to check out a restaurant called SoCo in the Thornton Park district of downtown Orlando. The restaurant bills itself, and has based its name, on southern contemporary cuisine. It was also a recipient of this years Florida Golden Spoon awards. As a fan of Art Smith’s Homecomin’ restaurant at Disney Springs, I was intrigued by the concept and decided to try it out.

The restaurant is located in the heart of the Thornton Park district of Downtown Orlando at the corner of E Central Blvd and Summerlin Ave. It’s a decent size restaurant with an indoor dining room, a fairly large bar area (that also has tables) as well as some limited outdoor seating.

There were a total of 4 of us having dinner. The menu is divided into Small Plates, Mains, Garden, and Sides. For our starter, we decided to split a Chefs Cheese Board ($15). This came with your standard blue cheese, brie, fruit preserve, honeycomb, and candied nuts. The unique item here was the drunken goat’s milk cheese. Since I don’t consume any alcohol at all, my friends tried this and were madly in love with it. With the exception of that, there was nothing particularly remarkable about the cheeseboard.

The same cannot be said for our other starter, the Lake Meadow Naturals Deviled Eggs ($7), which includes horseradish, smoked bacon, and pickled mustard seeds. The plate came with 4 deviled eggs, and from the first bite I was hooked. I love Deviled Eggs, especially when they are done well. I normally DESPISE horseradish and normally won’t eat anything that has horseradish. I didn’t realize that was part of this until afterwards. The flavor, the bite (from the horseradish presumably), the texture – all fantastic. This was so good, I ordered another plate of it.

For our mains, two of us ordered the 8 oz filet ($29) (my friend had his well done, while mine was a more civilized medium), one person ordered a 16oz Ribeye ($36) and another tried the Korean-Style Fried Chicken ($24), which came with a sweet and spicy sauce. The steaks were good. Not great, but good. However, thanks to an amazing bed of sour cream and scallion sauce, my steak went from good to great. All three of us who ordered steak were challenged to not start licking plates when we were done. It elevated a slightly above average steak to an excellent steak, and for $29 for a filet, that’s a great deal.

While the Korean-Style Fried Chicken might sound odd on a menu of southern contemporary food, this was clearly the chef’s way of putting his own twist on the dish. The batter on the chicken was crisp and the sweet and spicy glaze added a nice flavor profile and kick to the dish.

Unfortunately, dessert is where the wheels (slightly) came off the wagon. We ordered a Chocolate Pecan Pie ($8) which was described as ‘okay’, and a Potato Chip Crusted Chocolate Cake ($8). Now, let’s be honest, if you’re like me the words “potato chip crusted chocolate cake” will get you a bit excited. This type of excitement has led me to diabetes and a weight gain of 40lbs. A combination of salty and sweet in the form of potato chips and chocolate cake sounds like it would be amazing. Those delusional expectations were dashed with a single bite. Cheap shoestring potato chips (likely purchased in bulk) with a dry, uninspired chocolate cake combined with a very forgettable frosting was a real let down.

Now, for those of you who are used to Disney restaurants, I want you to take a moment and look back over the dishes I’ve outlined here, but pay attention to the prices. While two of us only had soft-drinks with our meals, the other two had a Manhattan ($14) and a Bourbon Ale ($8). The total for four adults, with starters, entrees, desserts, and cocktails was a very reasonable $232 (or about $50 p/p).

Given the price, the overall quality of the meal (with the exception of the desserts), and a fantastic location in downtown Orlando – this restaurant is worth checking out.

If you have questions or want to speak to one of our Realtors about purchasing a home in the Central Florida area, you can contact us here.