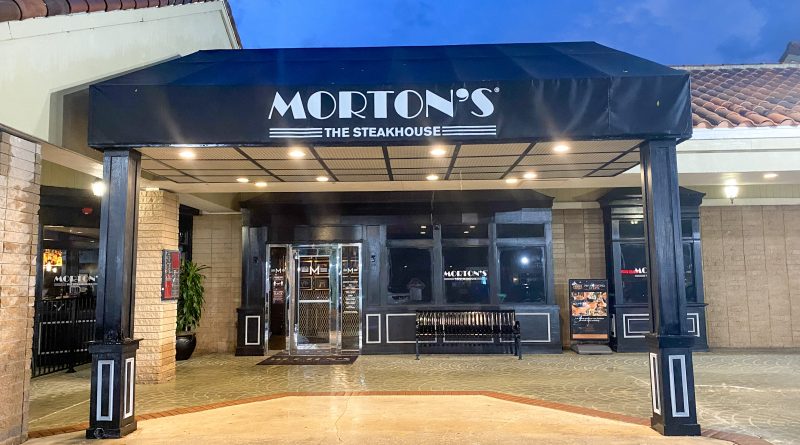 Some of the best dining in Orlando can be found on what locals call “Restaurant Row” in Dr. Phillips. On a recent evening, I had the chance to try out one of those restaurants, Mortons Steakhouse. This is not my first time at a Mortons restaurant – but it was my first time at this particular location. Now, in the interest of full disclosure, this meal was the first one I’ve had outside my house in 3 months. The restaurant itself had just recently re-opened after the Covid-19 shutdown. But I was over in that area and desperately wanted a nice steak. I wasn’t disappointed.

Initially, I’d thought that the meal was so good because I hadn’t been out of the house in months, and maybe that played a role, but the reviews on speak for themselves. This, apparently, is a great steakhouse and this was my first time there. I hang my head in shame.

There were four of us in attendance. For appetizers, we ordered a wedge of Iceberg ($11), Nueske’s Bacon Steak ($21), SRF Wagyu Meatballs ($16), and a Lobster Bisque ($15). I’ve done a lot of restaurant reviews, and honestly, the first thing I pay attention to are ‘the noises’. By that, I mean the noises my dining companions make when they start eating. Silence is bad. A few ‘mmm’s’ are better, but orgasmic groaning is how you know they are enjoying the food.

The Wagyu meatballs were superb. Two large meatballs made from Wagyu beef in a delightfully sweet and well-seasoned marinara sauce.

The Lobster Bisque was creamy and spicy enough to have a kick without being obnoxious. It also had two nice size chunks of lobster. The mark of good lobster bisque is one that isn’t ‘fishy’ and this one definitely fit the bill.

I ordered the Iceberg Wedge, which came with a creamy blue cheese dressing, blue cheese crumble, bacon bits, and egg. It’s difficult most times to get ‘excited’ about a wedge salad, but this was so good I ordered another one to go.

But, for as good as all of these dishes were, it was the Nueske’s Bacon Steak that was the clear favorite. First, take a moment and ponder that name ‘bacon steak’. Two long strips of pork belly, drizzled with an apple bourbon sauce that I’m pretty sure was made by God himself. After one bite, I dubbed this dish ‘meat candy’. Try it, and if you don’t come to the same conclusion there’s something wrong with you.

For our main courses, my dining companions all chose the same dish – the 6oz Filet Mignon ($39). It looked a little sad to me on the plate by itself, but presentation not withstanding, it was tender (you could cut it with a fork) and flavorful. Again, queue the groaning.

However, for my main course, I was thinking ahead. I ordered the 42oz Prime Porterhouse ($107). I say with some reservation, but it was quite possibly the best steak I’ve ever eaten that wasn’t Wagyu or Kobe. This was brined for 24 hours prior to cooking, and served with an Au Jus sauce. Again, this was a tender enough piece of steak that you could cut it with a fork. The natural flavor of the beef, combined with a very simple Au Jus gave it a flavor that was sublime. Of course, I didn’t finish this – like I said, I was thinking ahead. It might be a while before I venture out to eat again, so I brought most of it home and enjoyed it the next day.

We were offered a chocolate lava cake for dessert, but by this point, we were all so full from dinner we decided to take a pass.

I should mention that Mortons is owned by Landry’s Restaurants (which surprised me as I’m not usually a fan of Landry’s). As such, it participates in Landry’s Select Club, which offers you some perks including priority seating is one of them. That comes in handy at some other Landry’s locations, like Rainforest Cafe and some of the other Landry’s locations around Walt Disney World. The club is $25 to join, but you get $25 off your next meal, so it’s effectively free to join.

Walking away from dinner I kept asking myself how it’s possible that this was the first time I’d tried this restaurant. After all, I’ve been living in Orlando for more than 20 years, and lord knows I like to eat. Well, whatever the reason, this may have been my first time at Mortons in Dr. Phillips, but it will certainly not be my last.